The store will not work correctly in the case when cookies are disabled.
Menu
Account
Settings
Currency

In 2019, fellow Leeds Rhinos’ player and friend, Rob Burrow, revealed that he had been diagnosed with MND, which propelled Sinfield into his bid to raise £77,777 for both Burrow and the charity by running 7 marathons in 7 days.

Sinfield wanted to do something different to raise money for the charity. Burrow’s squad number being 7, gave way to the idea of running 7 marathons and Sinfield thought it only fitting that he should start the running at 7am every morning too. Getting up at 5am each morning to prepare himself for his daily marathons, Sinfield completed each of the marathons well within the 4-hour mark.

In his interview with Sky Sports, Sinfield explains that his reasons for wanting to raise money for the charity, started with Burrow, but ultimately, a cure needs to be found for a disease that no drug has been developed for, for over 28 years. 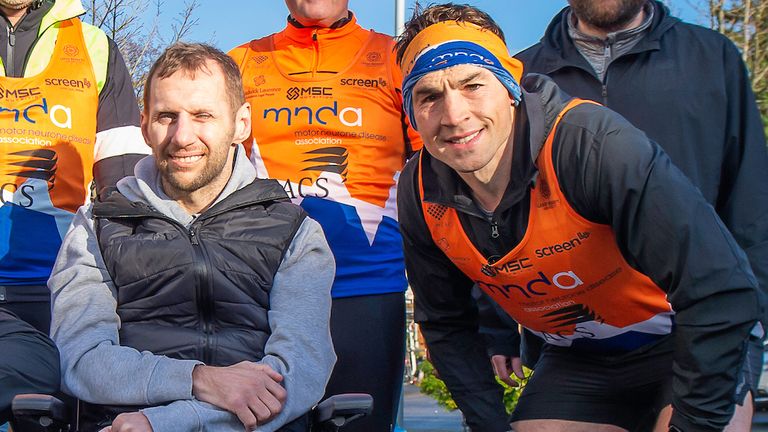 Sinfield and Burrow spent 14 years of their professional career competing alongside each other and Burrow made sure to greet Sinfield on day five of his fundraising challenge and said of his old teammate: "I hope you know I'd do the same for you, it means everything to me."

© 2021 Able2 Wear Ltd holds the copyright to all its original designs and will not permit copying of any of its products. The company will no longer tolerate the theft of its original and unique designs and ideas and will defend its IPR vigorously through law and seek compensation for any loss incurred through such theft. www.able2wear.co.uk Able2 Wear Ltd, Unit B The Courtyard, Tewkesbury Business Park, Tewkesbury, GL20 8GD | Telephone: 0141 775 3738 | VAT: 271 8483 79 | Company registration number 10809165